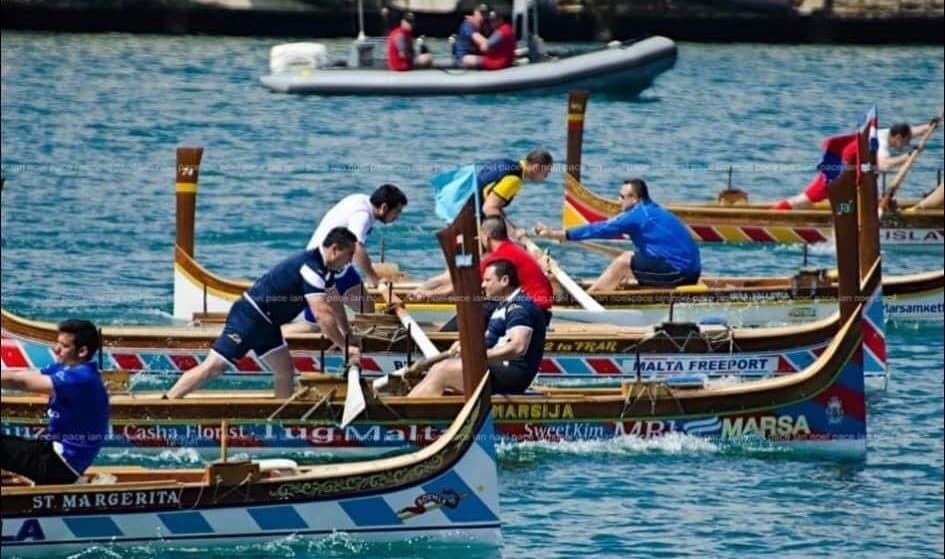 If you’re visiting Valletta at the end of March or the beginning of September, walking down to the Grand Harbour to experience the traditional Rowing Regatta races is a must. The Regatta, a tradition that goes back 200 years, is held twice yearly on September 8th to celebrate the feast of Our Lady of Victories, and on March 31st to commemorate Freedom Day. During each event, a number of races are held where various local rowing clubs participate with great enthusiasm.

The Regatta was introduced in Malta in 1822. At the turn of the twentieth century boat races were very common on feast days, particularly in towns surrounding Grand Harbour. The historian Pietru Pawl Castagna (1865, 1890), refers to the Victory regatta as having four different events: the four-oared fishing boats, the two-oared, four-oared passenger boats, and the four-oared caiques. Besides the “palju‟, cash prizes were given to the first three winners in each category. These four races were keenly contested for the winning “palju‟.

The traditional Maltese rowing style predates the reestablishment of the Olympic Games as we now know them. It is very similar to the rowing style practiced in the UK and Italy, which, over the years, became practically unique to Malta.

The format and regulations related to the National Regatta rowing races is heavily guarded through appropriate regulations and legislation. For example, in August 1975, the Malta Government Gazette published a set of rules for the races to be held in September. Most of these regulations, including a set of specifications for the boats, are still in use nowadays although some minor technical regulations (e.g. those related to permitted distances for overtaking) were updated over the years.

At present in the National Regatta races, held twice annually, rowers compete in two categories; Category A and B where, at least on paper, Category A is intended to be for the professional rowers whilst Category B is intended for the less experienced participants. In practice, since races are only held twice a year, there is a great level of competition in both of these categories.

In March 2022, The Embassy Valletta Hotel has signed a sponsorship deal with one of the local rowing clubs – the Marsamxett Valletta Regatta Club – with the aim of supporting the local community and be a major contributor to different cultural events that are organised on both national and local level. With this partnership, The Embassy Valletta Hotel wants to make sure to help improve the Regatta in Malta and support the many enthusiasts and club members who eagerly participate in this event.